The Scantlebury Family – The Adoptive Parents

The Scantlebury family came originally from Polruan in Cornwall. Richard Scantlebury, born in 1782 and a mariner, was married to Jane, (Our note: possibly Jane Bunt according to the records, born in 1794. They had four children: Samuel, Henry, Lydia and Benjamin. Their three sons had moved to Liverpool, where each of them married.) I expect the work prospects were better there.

The 1851 Census states there was an 8 month old grandchild, called Sarah Jane, in Richard and Jane’s house in Polruan. There is a birth certificate for a Sarah Jane Scantlebury born on the 30th June 1850 to her mother Lydia. So the baby was born to Benjamin’s unmarried sister Lydia, then aged 20. No father’s name is listed.

Lydia married in about 1856, and the 1871 Census lists her as Lydia Dyer, nee Scantlebury, living with her husband George Jewell Dyer at 18 St Vincent Street, Portsea, Hampshire. He was a ship’s carpenter, born in Polruan, Cornwall. His life at sea might explain his absence from his daughter’s birth certificate, if Sarah were his daughter.

Richard and Jane’s youngest son, Benjamin, later in life became a brother-in-law and foster parent to the Lytle orphans. He was born in 1834, and according to the 1841 Census, when he was 7 years old he was already a carpenter’s apprentice, and remained so in the 1851 Census. Obviously he had not been to school. By the next Census of 1861 he had moved to 99 Elias Street, Everton in Liverpool, where he was a joiner. He had married Elizabeth Northcott in 1855, and they had two sons, Charles Henry born in 1857, and Thomas in 1860. Elizabeth died in 1865 aged 34.

After Benjamin’s wife Elizabeth died, he married Margaret Lytle, aged 34, in 1866, who was John Lytle Jr’s sister. According to Ruth she had many miscarriages and still births, but no living children. There is a death certificate of one Benjamin John Scantlebury who died aged 5 in 1874. Is this one of her dead children?

There is a gap in the 1871 Census for Benjamin, but then, after the incarceration of his brother-in-law, John Lytle Jr, in 1874-5, we know that Benjamin and Margaret had taken in two of the orphans, John and Edward Lytle, then aged about eight and three. Benjamin’s own sons were then aged 14 and 17 and working in the family greengrocer’s shop.

By the 1881 Census, Benjamin and Margaret had moved to their house above a greengrocer’s shop at 71 Robson Street, Everton, where they remained for at least 20 years, and where all three of the Lytle orphans lived and worked.

The 1881 Census tells us the following people lived at 71 Robson Street which, according to the Liverpool Picturebook website, was  a street of small shops with living accommodation on the floor above and behind the shop.

This Census tells us that the household comprised seven people, so the house was fairly substantial, and the business successful, for them to be able to afford to keep three people besides themselves, to work in the greengrocery, plus a domestic servant.

The 1881 Census has Alfred Henry, the third son, aged 7, living with William (John Jr’s brother) and Jane Ann Lytle at 79 Burleigh Road South, Everton – just round the corner from Robson Street, where the Scantleburys lived. Also shown are William’s two daughters Jessie Elizabeth, now 15, and Margaret, now 13 years old. These girls were no doubt working, and not much company for young Alfred.

By 1886, the two nephews, John and Arthur, had had enough of the greengrocery business, or maybe the bullying of their Uncle Scantlebury, and they had run away to sea aged 19 and 15. They lived in the Southern States of the U.S.A.

By the 1891 Census, both John and Arthur had been in America for 5 years. In their absence, their younger brother Alfred had left school at 12 years old, and moved from his uncle William’s house to live with the Scantleburys in Robson Street, and work as their greengrocer’s assistant. He was 17 when the brothers returned.

Edward Lytle Jr, Arthur’s son, told Ruth his cousin, “Uncle Scantlebury owned several fruit and vegetable shops in Everton. John and Alfred had their own fruit and vegetable business in Anfield. Ann Lytle (known as Annie), his grandfather John Jr’s sister, also owned a greengrocer’s shop. She had begged her husband to help set up the two nephews John and Alfred in a greengrocery business of their own, but he had refused. It was not until her husband died, that she was able to pass on the family business to them.”

Unfortunately this cannot be true, as Ann had died in 1881, and was unmarried, so it must have been Margaret nee Lytle, married to Benjamin Scantlebury. Although in the 1901 Census, both John and Alfred are listed as living with the widowed Benjamin Scantlebury in Robson Street, we have a photograph of the two young men outside a shop, with their names over the window and the number 50. 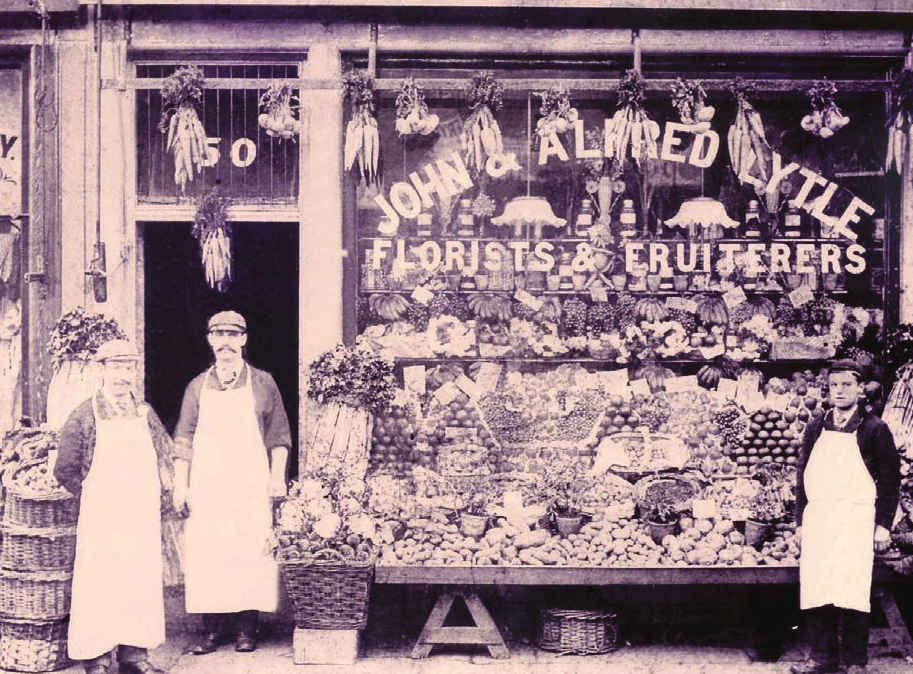 In the above photo, John is on the left, Alfred in the middle, with an unknown assistant on the right. I would guess that Alfred is in his mid 20’s, so the photo was taken in about 1898.

Ed Lytle told Ruth the shop was at 50, Oakfield Road, Anfield, Liverpool. We do not know whether it was a Scantlebury shop, or their own business. Jean Crane thinks the shop might have been in Formby, where a street has been named after them: Lytle Close.

Ed Lytle claims that, “Uncles John and Alfred tried unsuccessfully to obtain money or trust funds but their Uncle Scantlebury defeated them. At the time my father Arthur (the Missioner) was blamed for not adequately supporting his brothers’ case, but he was simply not interested in obtaining money.”

By the 1911 Census, old Benjamin Scantlebury listed as a widower and retired greengrocer, was living with George, born in 1872, and Mabel Bell, born in 1874, in Burnley, who were his niece and her husband. Presumably Mabel was born a Scantlebury, so she must either have been a daughter of Benjamin’s sister Lydia, who had been born in 1831, or actually be a great niece. Her father’s name was George, so she was probably a daughter of one of his nephews: George, born in 1852, the son of Benjamin’s brother Samuel. According to the Census, George Bell was a cotton weaver, and they had seven children living with them. Benjamin died in Burnley in 1912 aged 78.

Benjamin had two older brothers, according to the various Censuses, one of whom was Samuel, born in 1826 and married to Sarah, born in 1819, who came from Middlesex. At the time of the 1851 Census, they were living in Polruan, where Samuel was a tailor. During the taking of the 1861 Census, Sarah and their three children George Henry, born 1852, Jane Emma, born 1853, and Samuel, born 1857 were staying with, or simply visiting, her brother-in-law, Benjamin, in Elias Street, Everton. By the 1871 Census, Samuel and Sarah, plus the teenage children, had moved to Liverpool, and were living in a house in Darwent Terrace, Moss Side.

Benjamin’s second brother was Henry, born in 1829, and married to Elizabeth, born in 1831. They appear in the 1871 Census at 55 Luther Street, Everton, Liverpool. Henry was a master mariner aged 42, Elizabeth was 40, and they had three children: William Henry born in 1861, Herbert Henry born in 1863, and Elfleda aged 10 months, born in 1871. They had had a daughter called Elizabeth who died aged three in 1867. Some of Elizabeth’s relations, Thomas aged 61 and Susanna aged 58, were visiting them at the time of the Census (but they were not her parents, according to the Census. Her parents were called William Pearn and Elizabeth (nee Pinch). By the next Census, of 1881, Henry and Elizabeth had had another daughter, Emma aged 5, born in 1876. Henry’s occupation had changed to ‘overlooker’. By the 1901 Census, Henry, aged 72 was a foreman porter at a general warehouse.