Arthur was born on 5th December 1871. By 1881 the Census has him living with his aunt Margaret Scantlebury at 71 Robson Street, Everton, Liverpool.

When John was 19 and Arthur was 15, in 1886, they ran off to sea, and ended up in New Orleans. When Edward returned to Liverpool, five years later, in 1891, he trained as a city missioner. He preached twice every Sabbath, and held open air meetings on the beaches on the Wirral side of the Mersey every summer evening. He had married Annah (our note: also known as Annie) Hopkins, from Bray in Ireland, in 1900 and they had four children: Margaret, Edward, Annie and Lilian. I remember him after his marriage to Annah, preaching on the sands at New Brighton, Annah playing the harmonium, and his little ones in a pram longing for bed time, on long summer evenings. Later I remember all we children playing in the sand together at New Brighton, while our parents sang revival hymns to Aunt Annah’s accompaniment. My Mama didn’t approve of these events, she believed all children should be bathed, read to, and put to bed at 6 p.m. and this routine I believed in for my two children.

My parents called Edward ‘The Angel of the Dockside’ and although I admired his nerve preaching in the open air, I was deeply embarrassed at the same time, as a child.

Arthur and his family appear in several Censuses: in 1901 he and Annah were living at 34 Baker Street, Everton. Arthur was 29 and Annah was 21. They had married the year before, in 1900. He was listed as a Liverpool City Missionary. By the 1911 Census, they were living at 28 Westdale Road, Wavertree, Liverpool, and had four children: Margaret aged 9, Edward Arthur Jr. (usually known as Ed) aged 8, Ann aged 6 and Lilian aged 1.

Arthur’s wife, Annah, or Annie Lytle, nee Hopkins, was born in 1879, the daughter of Edward and Julia Hopkins of 10 Hutton Street, Liverpool. Edward was a labourer in a sugar house, and they had seven children. Julia was widowed in her 40’s and moved next door to 8, Hutton Street, and in her 50’s she moved again to 15 Salisbury Road, Everton, with two of her grown up sons. (See 1911 Census for details on Julia and family.)

According to the 1939 Register, Arthur and Annie were living at 80, Earlsfield Road, Liverpool, with their son Ed, who was a railway clerk. Annah Lytle died on 4th January 1966 in Liverpool.

The following is taken from the booklet “One Hundred Years….and more” written by Jean’s father, Jim Tighe, for the centenary of Wellington Road Mission Church, Wavertree, in 1978.

“Mr. Lytle’s twenty years at Wellington Road (1909 to 1929) was the longest period of service of any Missioner there, and on his retirement he had completed fifty years valued and worthy service for the Lord with the Liverpool City Mission.

When a boy he lost both his parents and at the age of barely fifteen years and unknown to the relatives with whom he lived in Oakfield Road, he went to sea aboard a sailing vessel. Lured ashore in Savannah, U. S. A. by an old seafarer who wanted to ‘jump’ ship, Mr. Lytle was taken inland and there found work in lumber camps in the backwoods of Georgia and as a mail-carrier, riding the pony-mail through the pine woods of South Carolina, to scattered farms and turpentine camps. Mr. Lytle’s jobs were as varied as the many locations in which he sojourned, from working on coastal ships in the Gulf of Mexico to being a supervisor or checker in the cottonfields, where he learned to love and sympathise with the negro plantation workers – a regard which remained with him and was given practical expression of during his Missioner’s days in the seaport town of Liverpool. From the southernmost states he worked, walked, and sailed his way northwards. It is said that a tragic accident to a workmate brought Mr. Lytle to think once again upon the things of time and eternity, and memories of home caused him to turn his face towards Canada. Some time earlier a letter from his relatives in Liverpool told of a family friend who had not been heard of since leaving Merseyside for Canada. Mr. Lytle was asked to enquire about the friend as he travelled North, and upon his arrival on the quayside in Montreal, to board a cattleboat as a drover and to sail for home, he saw the family friend there, on the same quay.

Back in Liverpool at the age of twenty years, in 1891, he was brought to the realisation of his need of the Saviour and there soon followed active participation in Christian work. In 1897 he joined the City Mission, labouring off Scotland Road, then in Everton; followed by duty in Ebenezer Hall, near Walton Breck Road before being appointed to Wellington Road Mission in 1909, where he endeared himself as a spiritually strong, compassionate, gentle man, solely concerned with leading precious souls to his Saviour. Mr. and Mrs. Lytle were made members of Hunters Lane Church and Mr. Lytle was elected a Deacon of the Church. He retired in 1947 after service in other Liverpool City Mission halls and as Missioner to the City Police and the Workshops for the Blind, He was called to be with his Master in 1952.” 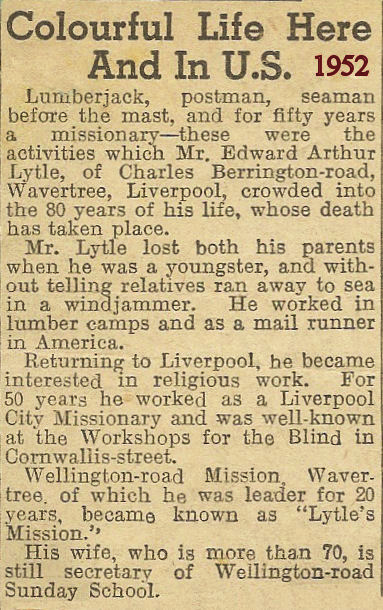 Jean Crane tells me that when he first became a Pastor, Arthur faced opposition from his adoptive family, who would not support him financially. The only person who encouraged him was his Aunt Margaret, his father’s sister, married to Benjamin Scantlebury. According to Arthur ’s son Ed, “Margaret repeatedly stated that money would be left by her for my father to build a new church, as she did not share the views of her brothers and sisters who had cut him off when he became a Missionary. However, he was deprived of an inheritance which he would otherwise have been given.” Presumably when Margaret died in 1900, any money she had, went to her husband Benjamin, and not to her nephews. Ed also says that her plans to leave a fruit and vegetable business to the other two nephews was not realised either, which caused friction between them and Uncle Scantlebury.

With these tales of the younger generation all trying to persuade the foster parents to set them up in their chosen careers, it seems they all thought there was some money in a trust fund for them, left by their father. The £116 left by their father had long been spent.

Margaret was born in Anfield, Liverpool, and at the age of 29 in 1931, was married to James Martindale, who was 39. They had no children. In the 1939 Register, they are listed as living at 78 Earlsfield Road, Liverpool. His profession is listed as boot shop manager. They moved to Blackpool around 1966.  Margaret died in 1967 and Jim died in 1970.

I remember Ed and Mattie with great fondness. They had decided to take a holiday in Bournemouth when I was about 12 years old, and must have had Ruth’s address. They turned up at the door, which I answered and Ed beckoned to Mattie who was a little behind him, “I know it’s the right address – she looks just like a Lytle!” I had no idea who they were, as Ruth had never talked about her Liverpool cousins. I think they had lost touch when she moved south. The cousins had a fine old chinwag, and I think we went to the beach and showed them around the Town. It must have been the school holidays, or they would never have caught Ruth in. After that they came for several more summer holidays, and stayed with us. Ed had a lovely sense of humour, and Ruth was a great tease. One year Ruth and I rigged up an apple pie bed for them. Goodness knows what they made of Ruth’s tricks. Ed and Mattie were very kind to me, and I recall being bought ice creams and tea in tea shops – real treats for me.

Ruth kept up with Ed and Mattie by letter until they died. She was so glad to renew the acquaintance of both her cousins, Ed and Lilian. It was a source of joy to her, as by her divorce and the death of her parents, Ruth had found herself cut off from the rest of the Lytle family.

Edward and Mattie had three girls.

Their first, Ruth Lilian, sadly died a few days after she was born.

Their second daughter  Ruth Joy was born in 1934. She became a school teacher, and married Norman Perry in 1961. They had a daughter, Julia, born in 1970, married Terry Bermingham and they had a son, Jamie Edward, born in 2002 in Tunbridge Wells, Kent. Ruth died in Truro, Cornwall, in 2011.

Edna May, their third child was born in 1937, who never married. She was a senior window display controller for Littlewoods. She now lives in St Agnes, Cornwall.

Lilian was born in Wavertree, and married James William Tighe in 1938, when they were both 28.

In the 1939 Register, they are listed as living at 70 Mossville Road, Liverpool. Jim was a Public Health Inspector, and Lilian was an almoner at the Women’s Hospital. Their only child is Jean Alexandra who was born in 1941 in Liverpool.

Lil and Jim also came to Bournemouth one year, with Jean. I was amazed to learn I had even more relations in the country, (when I thought I had none) and Ruth had so much joyous catching up to do with them. Lil died in 1986, and Jim in 1990.

In 1965 Jean married Frederick David Crane, who was born in April 1942 in Liverpool.

She was working in Martins Bank. Fred, as he was known, had attended the Liverpool Institute High School for Boys, where he was in the same class as Paul McCartney, of Beatles fame, for maths. Fred was employed at The Automatic Telephone and Electric Company, Ltd, followed by a long employment at IBM. He moved about the country a good deal, and worked in Liverpool, France, Hampshire, Buckinghamshire, and Surrey with the firm. In 1994 there was an opportunity for him to become a new product manager in Florida, so he and Jean emigrated, and now live in Boca Raton. They became American citizens in 2010.

Jean and Fred have two sons.

Neil David Crane was born in 1968 in Liverpool and married Lesley Anne Elliott (b. 1965) in 1989. In 1996 they emigrated to America, and now live in Florida, where Neil is Vice President of IT and Product at Cicero Inc..

Their only child is Benjamin Neil, born in 1995. He attended Boca Raton Christian School kindergarden and was among the first class to go straight to graduate high school. During his time at school he was the male lead in a number of musicals and played the part of Jesus in ‘Godspell’ during his final year. He won a full scholarship to Palm Beach Atlantic University honours programme, and graduated with a B.A. in Popular Music, and a minor in Ministry. PBA is a Christian University. He is currently employed by the Disney Corporation as a speciality performer in the Magic Kingdom, Orlando, Florida.

Leigh Simon Crane was born in 1971 in Liverpool. He trained in graphic design, but his love of cars resulted in a career switch, to owning his own Executive Car Service business. In Novenber 1992 he married Deborah Jill Hickman (b. 1971) at Frimley Baptist Church and they had two children, Abigail Deborah Alison (b. 1998) and Connor Leigh (b. 2001). Abigail is now studying to become a  Nanny at the prestigious Norland College in Bath. Connor will go on to sixth form college and is considering a career in the Royal Air Force.

After he and Deborah divorced, Leigh married Cathryn Mary Hughes (b. 1962) in 2004. Cathryn is a teacher, and head of year at her school in Southampton.