I have a copy of John Jr.’s marriage certificate. He married Alice Taylor in 1866, when he was 29 and she was 20. She was born in Bolton, but was now living in Liverpool. The wedding took place at Christ Church, Everton in the parish of Walton-on-the-Hill. the Census of 1841 shows John Jr. was a shipping clerk, living at Kirkdale Road, Liverpool.

Alice’s father was listed as James Taylor, a porter, living in Mopley Bank, Highwith. The marriage was witnessed by John Jr.’s sister, Margaret Lytle, and her fiancé Benjamin Scantlebury, who were to marry later.

John Jr. was listed on the 1871 Census at 50 Slade Street, Liverpool, when he was 34 and married to Alice. Their first son was John Taylor Lytle aged 4. John Jr. was now a cart owner.

The next address of John Jnr and Alice is 101 Ashfield Street, in the parish of St Martin, Everton, Liverpool. On searching a website of Liverpool photographs, I came across several old pictures of Ashfield Street which was a street lined with 3 storey terrace houses, plus basement, making four storeys at the back. There were two parallel blocks, and between them ran a dipped and wide cobbled back lane with a gutter down the middle. Fred tells me that the back lane was known as ‘the back entry’ in Liverpool, or just ‘the entry’ or even ‘the jigger’. They were called Ashfield Cottages, and looked like what we would call tenement buildings. They were presumably built on former ashfield sites, which had been cleared. Photographs showed washing lines everywhere and lots of children playing in the back lane. The houses had communal outdoor staircases and balconies. It looked pretty desolate in the later, 1950s pictures, before it was swept away in slum clearance.

Later, they lived in Candia Street.

We know from the orphaned brothers that in 1875, two years after their third baby was born, John Jnr was kicked in the head by a horse, and admitted to the Asylum. Alice died the same year possible giving birth to a fourth child or as a result of her ill health, or as Ruth says ‘from a broken heart’, aged 30.

The public records of Administration of effects (not exceeding £100) for 11th August 1875 state that:

My Father, the third son, was born in 1873 . His father, John Lytle Jr., was injured by a horse’s kick, from which injury we imagine he died. 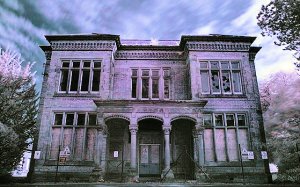 Ruth and her Father thought John Jr. had died of the kick, so it is obvious that his whereabouts was kept from the three little orphans. However, I find from the 1881 Census, that poor John Jr. was a resident at the Lancaster County Lunatic Asylum in Whittingham, Preston, Lancashire. Perhaps his unfortunate incarceration is the reason the family did not tell the orphans anything about their father.

John is listed as a widower of 45, a master carter, and a lunatic. The brain injuries he had suffered were obviously severe. The Census lists all 936 patients and 185 staff, many of whom lived in the asylum with their families. John Jr.’s death certificate states he died in 1884, aged 48, at Preston. It states he died of ‘softening of the brain and spinal chord, plus phithisis’ and is certified by John A. Wallis M.D.

John Jnr had inherited £116 from his sister Ann, and no doubt intended leaving it to his 3 sons, but as they were still teenagers, it was probably taken by the two adoptive fathers, who may have considered it legitimately theirs, as they had brought up the young boys.

When he died in 1884, he probably left this money to his 3 children, then living with foster parents. By all accounts these foster fathers, Benjamin Scantlebury and William Lytle snaffled the money and drank it away. Nothing was given to the three young boys, who left school early and had menial jobs. Margaret Scantlebury asked her husband to pass it on to the boys so they could open their own fruit and vegetable business, but there was no money left by the time they were grown up.

This huge Hospital and Asylum had been opened in 1873. It closed in 1995, and is now derelict.

The three little boys were each taken to live with separate uncles and cousins: John the elder by four years, Arthur by two years, and then my Father. Sisters there may have been, we never heard of any.

When I first went to Penrhos College, I shared a four bedded room, as all pupils did, on their first term, and two of these girls were from Liverpool. Their father was a bank manager, and the other girl from Leicester. Her father was a hosiery manufacturer. At half term the mother of the Liverpool girls, Winifred and Dorothy Walls, asked me out to dinner. I found not from an hospitable impulse, but from a curiosity one. Mrs Walls’s father had provided hay and straw to the Liverpool horse trams from their farms in Cheshire. The surname of her daughter’s room mate had interested her as the horse firm’s proprietor had been a youngish man called Lytle. I could tell her nothing and much later, probably a year or so, I mentioned this piece of conjecture to my Father, he also could not connect his father with anything.

It was presumably another Lytle who supplied the horses. I have searched all possible files/ websites on Liverpool trams but found no evidence for a Lytle connection. I only know two tram companies were set up by 1868 or just after, and by the 1880’s there were 400 horse drawn trams owned by the separate companies and then by the Liverpool Corporation Tramways. Each tram had a 14 horse team, so there were 5,600 horses owned by the tram companies. Supplying the horses would certainly have made the proprietor a wealthy man, but it was not our John Lytle, living in a Liverpool tenement with a sick wife and three small children.

In 1979 ‘Family Researchers Ltd’ wrote to both Edward Lytle and his cousin John Lytle, asking if they knew of two Lytle sisters: Miss Johanna Lytle who had died in 1951 aged 81 years and Isabella Jane Brown Lytle, who had died in 1933, to see if they were related. They were trying to ascertain the entitlement to some Trust Funds. The sisters were daughters of John Lytle, a wholesale grain merchant of Liverpool. It was thought they might have been sisters of the three orphans, John, Edward Arthur and Alfred Lytle, as they were all born in the 1860’s and 70’s. However, none of the orphans remember having sisters, and these names do not turn up in the Lytle documents that we have researched.

This John Lytle, is maybe the same man who turns up again, in Ruth’s story of her friend Miss Walls, above.

Edward Lytle replied to Family Researchers that the present Lytle family had no knowledge of Johanna and Isabella. This enquiry must have piqued Edward’s interest in his family, because he then carried out extensive research of his own on the family, transcribing birth and marriage certificates and attempting to write a Family Tree. He and his cousin John talked about their shared handed-down memories, and his notes were passed down the family.